Chris Caffery (born September 9, 1967 in Suffern, NY[1]) is an American musician, best known for his work as a member of Savatage and the Trans-Siberian Orchestra. Recently, Chris has been pursuing a solo career, releasing four albums since 2004.

Raised in Mahwah, New Jersey, Chris began playing guitar at age 11, but some of his earliest memories include performing the Beatles song Help! for a show and tell in kindergarten. Chris’ favorite bands growing up included the Beatles, Kiss, Black Sabbath, Judas Priest and Rush among others. He has cited guitarists such as Ted Nugent, Rik Emmett, Ace Frehley, Randy Rhoads, Michael Schenker as influences throughout the years as well.[2]

After only 13 months, Chris grew bored with guitar lessons and decided to teach himself. He was part of a band called “Blitzkrieg” in middle school and played a few shows, the first of which was at a bar in Ridgewood, New Jersey when Chris was only 13. At the age of 14, Chris and his brother formed a band called “Anti”. Chris Graduated High School at the age of 16 and quickly become a professional musician, teaching students during the day and playing shows in the night.

Chris recorded his first demo tape at age 14 and his second at 17, which got him his first national gig. Chris was in New York City one night, hanging around in a club in the middle of Times Square, when he met the lead singer of a band called Heaven named Allan Fryar. They were looking for a guitarist and Chris asked if he could give Allan a tape. A week later and Fryar called, and it turned out that the band also needed a drummer, so Chris’s brother Phil joined. The band was managed by David Krebs and a certain Paul O’Neill, who Chris would maintain close ties for most of his career.

Paul O’Neill was later introduced to the Oliva brothers, Jon and Criss of Savatage by an Atlantic Records rep and O’Neill left Heaven to work with Savatage. Eventually, Paul invited Chris to New York, where they recorded the CD and introduced Chris to the band. But, Chris soon learned that a second guitarist may be needed in Savatage, so he learned all of the Savatage songs he could in time for Savatage’s 1987-1988 tour with Dio and Megadeth. Savatage hired someone else, which left Chris very upset and he flew himself down to the audition. Chris was given the opportunity to perform, played 2 songs before the band stopped and hired him on the spot. The band went on tour, but Chris was kept on the side of the stage, hidden from the audience. Chris was only 20 years old and playing arenas and was happy, but miserable. He left Savatage after the arena tour.

Chris bounced between bands for a couple of years until he came into contact with the Oliva brothers once more. They asked Chris to join them just as the Gutter Ballet album was finished. He gladly accepted, but the road took its toll on the ‘tage. with outside pressure to finish their dreams of a band together Chris regretfully quit Savatage at the end of the tour and formed Witchdoctor, with his brother Phil on drums, Hal Patino of King Diamond on bass, and future TSO West member Doug Kistner on keyboards. The band played all over America however the brothers were not clicking musically and the band disbanded. Chris was contacted to perform on Savatage’s Streets tour, but issues meant this did not happen. Chris soon learned that Jon Oliva had left Savatage. Chris called Jon, who invited him to Florida, and over “10 bottles of Jack Daniels”,[3] their project Doctor Butcher was born.

Zachary Stevens replaced Jon in Savatage, but Jon continued to work with his brother Criss on the record. Chris was again asked to re-join the band, but, he stayed loyal to Jon and Butcher. Some initial demos were recorded with Hal Patino and Gene Barnett for Butcher, but bad press over Jon’s health lead Atlantic Records to make a decision – Doctor Butcher or Savatage? Atlantic chose Savatage. Chris was left disheartened. Caffery went to work with friend Ray Gillen of Badlands fame, but Gillen died shortly after the project began. Around this time, Criss Oliva was killed in a car accident by a drunk driver on October 17, 1993.[4] Chris was asked for the fourth time to join Savatage, but Atlantic Records suggested Alex Skolnick join the band instead. Chris would later work with Alex on the TSO East touring company. Butcher was signed in Europe and their debut was recorded in 1994. Jon Oliva left to do the Handful of Rain tour with Savatage so Butcher never toured. Chris, this time, enquired about joining Savatage on a more permanent basis with Jon Oliva, as a close friend and student of Criss Oliva he felt he could pay respect to Criss “spiritually” on stage. Jon agreed, and Chris was joined by Al Pitrelli, a good friend of his from New York. The two formed a steady partnership for almost 6 years, recording both 1995’s Dead Winter Dead and 1998’s The Wake of Magellan together.

During this time, Chris recorded with Joe Lynn Turner, TM Stevens, as well as produced and recorded for Metalium. Chris was featured on Tribute CDs for Guns N’ Roses, Accept and Iron Maiden. The Maiden tribute was recorded with Savatage drummer Jeff Plate and his “long time and newly re-acquainted best friend”, TSO member, John West. Savatage was stalled a bit in the recording of a follow up to The Wake of Magellan, due to the tremendous success of the then “side project”, Trans-Siberian Orchestra. Caffery considers himself the “ring leader” of TSO East when they tour, and he enjoys performing live with the ensemble. In 1999, Caffery also was a member of the German band Metalium. He is featured on their album Millennium Metal: Chapter One, but left after the album and the following tours.

Al Pitrelli left Savatage in 2000 when he accepted an invitation to replace Marty Friedman in Megadeth. Zak Stevens left shortly after, citing family reasons. Chris was left as the only guitarist in Savatage and Jon Oliva took up lead vocal duties for the first time in ten years. Chris played the lead parts with Jack Frost (ironically, who replaced him in Metalium) playing the rhythm parts on a short tour with Fates Warning and Judas Priest in support of 2001’s Poets and Madmen. After Megadeth “disbanded” (it later reformed in 2004) in 2002, Al Pitrelli was invited to re-join the band since “he never left the family anyway”.[3] 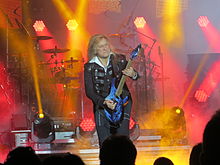 Chris Caffery playing with the Trans-Siberian Orchestra in 2014

Since the release of Savatage’s most recent CD, Chris has appeared on records of Savatage alumni, including Zak Stevens’s Circle II Circle and on Jon Oliva’s Pain records. Chris himself released solo EPs and albums in 2004 and 2005, with a follow-up full-length album, Pins and Needles released in 2007. Chris is also worked on TSO’s new album Night Castle, released on October 27, 2009.

In 2011, Chris released his first commercial hot sauce called “Tears of the Sun”. It was released through a small hot sauce company he is a partner in with Steve Seabury and his wife called “High River Sauces“. The sauce won major awards including “The Hot Pepper Award” for best overall Hot Sauce in 2011. A second release called “Grapes of Wrath” was released in 2012. The sauces are gaining a lot of attention world-wide as the venture continues to build. Including. Featured article in the “New York Post” highlighting Chris’s sauce and the first ever New York City Hot Sauce Expo!

Musically Chris appeared on several releases as a guest musician. He also toured as the guitarist for the legendary German Metal vocalist Doro as well as a solo tour supporting Heaven and Hell with Tim “Ripper” Owens‘ band in Europe. He co-wrote and played the guitars on the song “The Shadows Are Alive” on Tim’s first solo release entitled “Play my Game”.

Chris is currently writing new material for an upcoming solo release as well as several other musical projects.

Hey! 🙂
I ordered some of your awesome items from your store back in September for my mom who is one of your biggest fans, and my order still says awaiting processing. Any idea when my order will be ready?? My mom has end stage cancer 🙁 thanks so much. Alethea 610-844-1083

Greetings Chris, I have enjoyed your concerts with TSO for 18 years now and have attended both Daytong and Cinci concerts each season as you bring such joy to my friends that I bring along and introduce to this very special holiday season. So thank you. I am a serial Entrepreneur and have been working in Dayton all of my life here locally as a Realtor 22 years, Environmental services owner 15 years and owner of a DIY virus mold bacteria odor cleaning kit called Justfogit.com I am reaching out to you with hopes that we can email each other after this busy season with a company I have just started the ground work with called Stone Soup Union. We are building a B Corp to grow 500 acres of Hops and 100 acres of lavender and other pieces like Ginseng, Goats for dairy products as well as other items including salsas all grown on this farm. This is a $40,000,000 project and something with great earning potential. $12,000,000 net profits a year or better once plants mature. Anyway. I hope we can chat I may have some opportunities for you which will allow you some relief retirement and other items once you grasp the concept of SSU you may b interested in being part of this. I am already in the funds part of things but felt for the last several months you would be interested as our culinary department is going to produce items of high quality and rare combinations. I look forward if possible to speaking with you.